Mattie left school at 14 (1938), her mother stopped her becoming a private maid (skivvy), and went to Polikoff’s until she became pregnant. (1946). She returned to do hand sewing but hated it. They made overcoats for soldiers. She was exempt for ammunitions work or land army if she married within six weeks – so she did so! Her sister worke din the ‘snobby’ part – dress division. Dancing and going to pictures. Father very strict chapel – good singer and went to Eisteddfods. Cycling to work. Wireless at dinner time. Welsh-speaking. When her husband was out of work she worked in Hirwaun clothing Factory. ‘I hated it’. Wearing trousers (like bolier suits) in Polikoff’s. Needle through finger. Those in charge Londoners. Holidaying in Barry – lamplighter. Mattie and her husband looked after several clubs after this. Then in the dairy – canteen.
Read the transcript of the interview

After leaving school at 15 she became a waitress and worked in a shoe shop before starting in the factory c.1953, printing tablecloths. If you spoiled the work it came out of your pay. She mentions the unhealthy smell of the paint (dye); earning £20 a week; carrying heavy rolls affecting her periods. She had a nasty accident because she wasn’t wearing rubber wellingtons. No union. The Pont-henri factory was built for coalminers with silicosis but the paint fumes were too strong. She believes that the company’s workers in Birmingham earned more than them. The cloths were sent all over the world and the girls put messages in with the orders to get pen-friends. The workers smelled of thinners. They stole bleach to clean their nails She learned to dance in the cloakroom. She left when her mother died to keep house for her father and brothers. Some verbal harassment of young boys in the factory. Singing on a Friday. Taking a float to Pont-henri carnival. Drinks at Xmas.
Read the transcript of the interview
Part of this interview is available as an audio file
Read an English translation of this audio clip 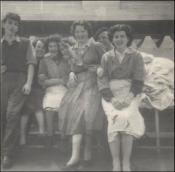 Mary (Macdonald) Davies worked in the Dolgarrog factory, after a couple of years in a bakery. She worked mostly in the light mill, like most of the women, but often went to help the men in the big mill, lifting aluminium sheets onto the roller. She said she wasn't given proper training, and that it could be dangerous work, as the aluminium was sharp. She describes one incident just after she started: “I stood by this trestle, and this sheet came out, oh, I can feel it now. And it hit me. Oh, the pain, I thought 'Oh God, what's happened?' And I didn't know what to do, did I? So she said 'Pick it up.' So I picked it up. And if you're not quick enough, cos you've got two sheets, one's going over while the other's coming, its a continous thing, so if you're not quick enough the other sheet comes out.” She left to have her daughter and didn't return to Dolgarrog, though she did work for a short while in the rubber factory in Llanrwst, making wet weather clothing.
Read the transcript of the interview

Ann left school at 15 (1961) (suffered with rheumatoid) and worked in Woolworth’s, before having a daughter and trying for work at Attwood’s. Offered a job as a solderer. A year’s training. They made jewellery. Details of job. Hundreds of designs- making the Welsh feathers. Plating room. Making Lady Diana earrings, Elizabeth Taylor and Pink Panther necklaces. Different processes Miner’s strike 1970s – power cut to factory and chaos. Having to work nights to make up orders and get wages. Union didn’t help her. She enjoyed training others. Working with lead – white blisters on hand – undiluted flux. Also asbestos – suddenly ripped out. Degreaser machine – let out fumes. No masks. Overalls with A&S on them. Rheumatoid arthritis while there – hospital - had to leave. Some supervisors bullied to leave. She worked here for 27 years (1969-97) She also did second jobs (in cafes and clubs) when in factory to support her daughter. Records and singing. Describes different jewellery – Concorde necklaces; tiaras; crystals from Swarovski. Bosses paid for Xmas party- box of chocolates each. Raffling jewellery. Worked on a variety of processes – soldering was a creative, skilled job.
Read the transcript of the interview

Gloria left school at 15 and stayed home to keep house after her mother died. Then she married in 1954 (21 years old) and had 5 children. Then she started shift work at the factory in 1972. She started on the assembly but went on to the process – which was more noisy because of the machines. They made different types of batteries. The women weren’t allowed to work on the night shift. There was dust from the cadmium in the process department. She injured her finger. There was a lot of leg-pulling there. She left in 1979 because the factory was closing. She remembers several floats in the carnival. Her son worked there and her daughters during the holidays.
Read the transcript of the interview

Dilys worked in the Corset Factory from the age of 15, straight from school. She worked on various lines, on different parts of the corsets. She enjoyed it there but on the whole found factory work repetative and boring. The factory was very basic: “It was a concrete floor and there was dust there, lime from the corsets. We had an X-ray every year. A man brought water in, in a watering can, he went around the place like that, watering the floor. There were windows like those on a greenhouse upstairs, and in the summer, it was boiling, you were being cooked alive.” She also worked later in other factories, such as the cockle factory in Caernarfon and Ferranti in Bangor.
Read the transcript of the interview

The speaker left school in 1959 at 15 and started work at the factory in 1960. Her mother got her the job. She worked on the radiators. Piece-work. They didn’t stop to talk. Target - a score in an hour. Mainly women doing the radiators – men wouldn’t do it. Only boys were accepted as apprentices. Women left when they were 6½ months pregnant. Jobs were not kept open - she left in 1971. She went back to work after the children were born – four hours in the evening. Women got the full-rate at eighteen and men at twenty one. Men’s wages always larger than the women’s. Perks- discount off a car – a Mini perhaps. Unionism. Conditions: wearing rubber gloves because of with acid; accidents – one boy lost a finger; cold; Worker’s Choice over the radio. She mentions working in the ice-cream factory in Pembrey where the conveyor belt made her faint. The Morris Motors Club – Xmas parties for the children.
Read the transcript of the interview

Dafydd started as an apprentice tool setter in Kaylor Compacts on leaving school at the age of fifteen. He wanted to be a driver and only worked there a year before getting a job on the Co-op van. His main job was going round and changing the tools on the presses, and pushing the compacts into a tunnel where they were heated, and maintenance work, although he was suppose to be a tool-setter. He didn't like the job because of the way the foremen, two in particular, treated people, but he said his co-workers were great. When he walked down between the machines, the girls would pull his leg and call out things like “Do you want a thrill?” and he was only 15! The women looked after him. When he went to the canteen, there was a nice woman there who'd let him pay the next day if he didn't have enough on him. They didn't serve hot food, just snacks. He did work in another factory, Bernard Wardell, after leaving the compact factory but mainly did driving work thereafter.
Read the transcript of the interview

The speaker left school at 15 in 1959 and after working for poor wages in a shop, she started working in Morris Motors in 1962 ‘the happiest years of my life’. She says the people said ‘factory girls, common’ but there were no fights or bad language. More sociable hours in the factory. She was offered to go to Oxford to learn to train new workers, but she was pregnant. Given her notice to finish at 6½ months (1969). Members of her family working there too. She returned (1970-4) as supervisor on evenings. She worked in the Co-op afterwards. In Morris Motors she liked the steady job, the holidays, the happy atmosphere. The workers in Oxford got higher wages for the same work. Conditions: rubber gloves; a surgery and nurse; accidents; the cold; singing to Workers’ Choice; her husband’s disapproval. British Leyland stopped the bonuses – now targets per hour. Fun on Xmas Eve. She felt valued in the factory because she and her twin sister (VSW006) were good workers.
Read the transcript of the interview