Gaynor worked at Courtaulds for 4 years, the whole time on the coning. She did have an interview but she can't remember it and neither can she remember her first day, though the factory was much bigger than the paper mill where she'd been working previously, straight from school. At Courtaulds, there were three factories - Deeside, Castle and Aber; Aber was the nicest one and she was in that one. Gaynor hadn't done that sort of work before so she had a couple of days training when she started. She picked it up very quickly and loved it there, because it was something she'd achieved, keeping her 'ends' up and the cones going. They had a machine each and she worked in a team with two others who were older than she was and had started before her. Gaynor started on 'normal' coning machines and because she was fast they put her on the wool. She left at 20 and got married soon after. She returned to factory work later on, for a few years, but not to Courtaulds. In 1970, her photograph was used in the office Courtaulds magazine.
Read the transcript of the interview 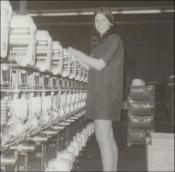