While a pupil at Bridgend Grammar School Betty passed 13 O Levels and stayed to study for A Levels, but decided to leave (1950) and went for an interview in her school uniform to the Carbide Factory, which produced acetylene Gas. She worked in the Laboratory, analysing local limestone etc. She describes the dust, the dangers working with nitric acid, tough girls, technical courses at college, inequality of pay, excellent bonuses; problems with acne; accidents and the nurse; and the subsidised canteen. She left when she was expecting her daughter in 1960. She returned to help close the factory in 1965/6. It had been like a family there.
Read the transcript of the interview

Kitty left school at 14 (1944) and after working in a laundry she went to work in the order office of Hancock’s brewery (1947 -) Gave her mother her pay packet but then decided to keep it. You could walk in and out of jobs then. Women did the bottling in the brewery. The girls wore canvas aprons and clogs for some jobs. The company had other breweries in Cardiff and Newport – met up for dances. She used to shop on behalf of one man in the office with her. She met her husband there. Turkey gift at Xmas. No union – those who joined – chucked out. Union accepted at last – c.1948/50). Accidents – bad cuts when bottles burst, had to go to hospital. Sacked if caught stealing beer. Bags searched. Lots of pilfering – some drunk in work. Music in mess room and sing songs. Lorry drivers shouting things at girls, but no aggro. Annual trip to London on the special train with the other brewery staff. The men had football and cricket teams and the women a baseball team. Worked there 17-18 years (- c.1964-5).
Read the transcript of the interview

Iris worked in the Curran’s Factory as a summer holiday job when she was 16 (1956), although her mother was appalled because her father (who had worked in Curran’s during the war) said that factory girls were very common. The factory was making parts for tanks – heavy industry. She was told to wear an overall and a turban. Rhondda girls wore curlers under their turbans. She had to check the straightness of tank tracks (not skilled). Sitting down but physical job. She describes it. Crude jokes. She got her O Level results (through the Western Mail) when she was there. She had to pack bundles of rods and varnish labels. Story of the blind worker and his dog. Shock of working a week in hand. She wore very heavy duty rubber gloves. She was warned of one man who might harass her. She learned a lot there. Later she went on to finish her A Levels and to a career.
Read the transcript of the interview

Mair left school at 15 (1952) and worked on a relative’s farm for three years. Then she had a job in the laboratory in Pont Llanio and within a year was moved to the office. In the laboratory she took samples of milk. The factory made powdered milk. There was a room there for the workers to play table tennis. Office work was better paid. She prepared the wages. There was a strike in the sixties – a dispute about a driver in the Felin-fach factory. The manager was given a car and a house by the Milk Marketing Board. On her wedding day a milk lorry came down her street and rang the horn all the way. She left when she was pregnant in 1967. Since then she’s done several jobs – caring in an old people’s home was her favourite. She learned to type in the Pont Llanio office. It was a happy place to work.
Read the transcript of the interview

Bill became one of a 100 apprentices in the Switchgear Factory in 1964; he was 16/7. One woman apprentice (before his intake) – one of the first ever for Switchgear. She became a draughtswoman. Details of apprenticeship. Then offered the job of a sales rep.for Eriez Magnetics. His wife was a sewing machinist in Crompton, Sons and Webb (Newport). Moved to Macclesfield, office in Wimslow. Switchgear had 4 factories in s. Wales: Pontllanfraith, Caerphilly, Aberbargod and Trefforest. In Pontllanfraith about 150 women covering heavy copper bars with araldite etc. Earning less than the men. Also as tracers, typists, paint shop – very dirty and greasy work. Women teasing the young lads – older women the worst. Some crude and rough. He returned to Wales as salesman for WCB. Excellent overview of factories where women worked in south-east Wales, e.g. Alexon, Weston’s/ Burton’s Biscuits/ Lovell’s/ Triang etc. ‘I’ve been abused by many of them!’ It was verbal abuse and swearing. Gives an example of crude teasing from Slimma’s St David’s. Notes going to social functions in factories especially Xmas time. Working piecework, less banter. Example of one girl taking all the small bras to sew in Crompton’s. Mentions that workers had sex on night shift in one factory.
Read the transcript of the interview

Patricia left school at 15 (c.1951) and hoped to go to university, but her brother needed an apprenticeship instead. Describes how her mother was treated unfairly by Redifusion. Factory work had a stigma, but wages good. Lotery’s made uniform tailoring. She did an evening class in dress making and design at the same time. She wrote operas and did crossword puzzles to occupy her mind. Working on the overlocker was ‘mindless’. People there from different backgrounds and abilities. Expert lip reading and no secrets. Rivalry between smokers and non-smokers about productivity. Intricacies of piece-work – a lot to learn. Time and motion strategies. Concise movements made work more efficient. Challenging the manager by singing. Union relationship with management poor. After a time driving a minibus, she was offered a job at RSW. Career details: Lotery’s c.7-8 years (c.1951-8), c. six months in Western Biscuits; returned to Lotery’s (c.1960-4/5) as machinist then trainer. She worked for RSW 1974-78.
No transcript of the interview is available 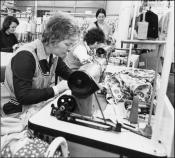 Esther left school at 15 (1965) and started in the Edwards Factory, ticketing and inspecting. Machinists didn’t like to have their work returned. They made dresses for M&S. The workers – pressers, cutting etc were divided into cages. She was not on piecework but had some bonuses. She used her wages to buy a sewing machine. She stayed there about 3 years. Everything in the factory would be covered in paper overnight and doubly so on stop fortnight. She left when pregnant (uncertain from which factory); she worked temporarily for Cymer Bookbinding on shift work with machinist sewing catalogues. She went to Revlon’s in 1988 – evening shift, part-time and after 3 years full-time. Changed shifts. She did all kinds of tasks there – labelling, filling, etc. In the beginning in aerosol dept. dangerous - if a can was faulty it would explode. Other workers were afraid of this job. Also using boiling water with the perfumes – dangerous. Many of the workers there didn’t like the factory. Talks of some workers who took advantage and didn’t do their work. Bad management. Revlon taken over – Cozy? She stayed 15 years + 5 others, off and on. She had bonus of £200 every year for not being off sick. She only worked in the rubber factory for a few weeks because of the smell – trimming the rubbers that go round the windows of cars. She discusses unfair incidents. However she earned good money.
Read the transcript of the interview

Glenys left school at 14 (1946) and followed her friends into the factories. She worked in Mettoys for the Xmas rush, 1947 and then in the new Louis Marx factory. Her number was 312. Office staff ‘a bit above’ them – had tablecloths in the canteen. She made pop guns and Daleks. Piecework. Time and motion man working out targets. She left when she was pregnant (Worked 1948-54). Maternity benefit if you worked six months of pregnancy. Singing on bus. Unions – stop work if too hot. Variety in work. Football and netball teams and concerts in canteen. Handpainting toy cars. Cleanliness. Had something in her eye - to hospital. Everyone helping one another. Security at the gate. Strong language. In Mettoys listened to Queen’s wedding on the tannoy. At Louis Marx one minute’s silence when King died. Banter. Later returned part-time to Louis Marx. She also worked in Smith’s Crisps before returning to Louis Marx – frightened of big machine. Smelled of crisps. Worked like a robot there.
Read the transcript of the interview

Rosalind left school at 15 (1958) and soon went to the Anglomac Factory, which made raincoats. She was in the cutting room – until 18 she could only lay out the fabrics. All the cutters were women. The factory closed (after c.1 year) and she went to the shoe factory. Believes there was a stigma with being a factory girl. The cutting knife could be dangerous. Perks – buying raincoats and got cottons. In New Stylo she decorated the shoes, using a stapling machine attaching trims. Stayed a year again. Bigger factory wirh more facilities. Later when she had children she worked in Revlon (c. 1969) on 10-2 shift – mothers’ shift. Very fast and boring jobs there. One job putting a top on a bottle and hitting it with a mallet. Nonstop so had to be replaced if she wanted to go to the toilet. Some of older women talked a lot about sexual things. She worked intermittently there for a period.
Read the transcript of the interview

After leaving school at 14, working in a laundry, getting married and having children Joan began working part-time in Fisher Price Factory making wooden toys in c.1973. They were afraid of the foreman because if the machines broke it stopped the assembly line. You had targets and bonuses. In winter it was very cold and in summer too hot. She moved to Mettoys c.1973 when Fisher Price closed. Again she left because the factory closed c.1983.
Read the transcript of the interview